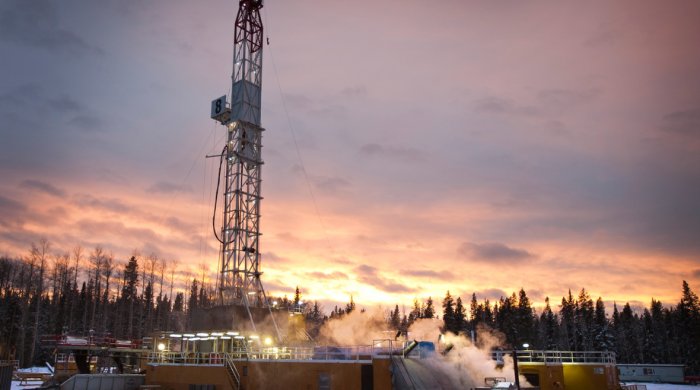 CALGARY (Bloomberg) -- Drillers are moving ahead in a corner of Canada’s oil sands that saw a flurry of land grabs in recent years, unfazed by a glut of crude that depressed prices last year and the mandatory production cuts that followed.

Cenovus Energy received regulatory approval in January to drill new wells in 35 sections of the Marten Hills region of Alberta, an area just east of Slave Lake. The company is targeting heavy crude found in the Clearwater formation, buried at a depth of more than 1,600 ft, below the layers of oil sands that traditionally has drawn companies to the region.

“We’ve drilled five appraisal wells at Marten Hills so far and are considering a small summer drilling program for the area this year,” Sonja Franklin, a company spokeswoman, said in an email. “We see it as a potentially promising play.”

Oil production in this fledgling oil play is picking up even after a shortage of export pipelines created a glut in Alberta, pushing heavy oil prices to $50/bbl below the U.S. benchmark in October. While output cuts imposed by Alberta’s government eased the oversupply to the point that the province is easing back, a renewed glut may emerge after Enbridge announced that its Line 3 pipeline expansion won’t start operating until late 2020, a year later than planned.

Cenovus, which had previously listed Marten Hills for possible divestiture, has drilled 5 multi-lateral wells in the area and grown production to 700 bpd at the end of last year from 300 bpd reported in 2017. It’s one of three companies that dominate the area, along with closely-held Deltastream Energy and Spur Petroleum.

Deltastream isn’t affected by the curtailments because it produces less than 10,000 bpd, below the threshold set by the government, the company’s CEO Roger Tang said by phone. While the lack of pipelines may prompt drillers to avoid tapping some “marginal” wells, his company, which drilled close to 30 wells, plans about 20 more through early 2020, Tang said.

The three companies are pumping almost 14,000 bpd, while according to some estimates the area could produce as much as 30,000 bpd, Tang said.

Cenovus is proceeding cautiously, not planning “any significant drilling program,” Franklin said. “Licensing of potential appraisal locations is part of the de-risking process and is standard business practice. Capital discipline and debt reduction are still our top priorities."