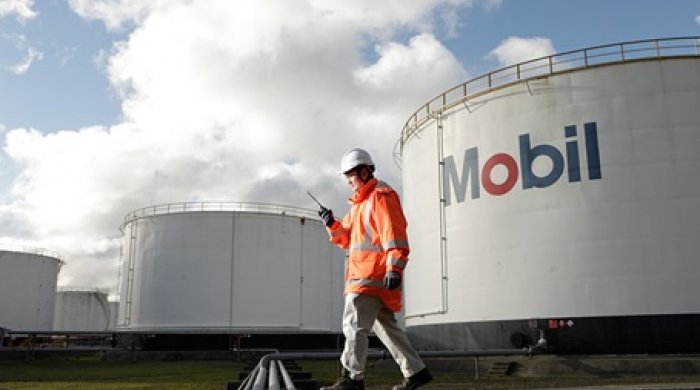 CALGARY (Bloomberg) -- ExxonMobil Corp. is delaying a C$2.6 billion ($1.9 billion) oil-sands project in Canada by at least a year as the nation’s energy industry grapples with a shortage of pipeline space and government-mandated production cuts.

Exxon’s Canadian subsidiary, Imperial Oil Ltd., had originally planned to bring the 75,000-bopd Aspen project online in 2022, but is now slowing the pace of development at the site in northern Alberta. Any decision to resume normal activity will depend on future government actions and general market conditions, Imperial said Friday.

The delay is another blow to Canada’s oil-sands industry, which suffered from record low prices last year after a wave of new production overwhelmed the region’s pipeline capacity. That spurred the government of Alberta, where most oil-sands projects are located, to mandate production cuts to drain a glut of crude in storage and revive prices.

The move also reflects Exxon’s increased focus on projects off Guyana’s coast and in the Permian Basin in Texas. The company last week increased its target for Permian production to 1 MMbopd by 2024 and expanded its estimate for the size of its Guyana discovery to 5.5 Bbbl.

Imperial, which owns refineries that were benefiting from the cheaper feedstock, has been one of the loudest critics of the curtailment policy and cited the plan again in its explanation for the Aspen delay.

“We cannot invest billions of dollars on behalf of our shareholders given the uncertainty in the current business environment,” Imperial CEO Rich Kruger said in a statement. “That said, our goal is to ensure the work we do this year will enable us to effectively and efficiently resume planned activity levels when the time is right.”

Imperial hinted at a possible slowdown at Aspen last month, saying it was re-evaluating the project after the forced production cuts introduced new risks. The company also has said previously that the curtailment policy, by boosting Canadian heavy oil prices too high, has made shipping crude by rail uneconomical, forcing Imperial to dial back its rail shipments to almost nothing last month.

Alberta Premier Rachel Notley said that her government has been in contact with Imperial throughout the curtailment process and was aware of the company’s concerns.

Ordering the curtailment was “the best decision out of a series of bad options” that the government had to deal with, Notley said in response to reporters’ questions after a speech in Calgary.

“We want to phase out curtailment as soon as we can, but we have an obligation to make the best decision we can for the greatest number of workers in the sector and also on behalf of the people of Alberta, who own the resources,” she said.

Imperial sanctioned the Aspen project in November. The operation would use an extraction method called a steam-assisted gravity drainage, in which steam is pumped underground to heat up sludgy oil-sands bitumen, allowing it to flow through another pipe to the surface.

Imperial was slated to spend about C$700 million on the project this year, and the extra free cash flow stemming from the delay may be used to buy back more shares, which would be a positive for the stock, Dennis Fong, an analyst at Cannaccord Genuity, said in a note.